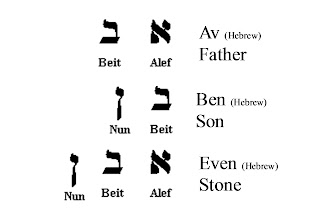 If you put together the Hebrew letters that spell Father and Son, you get the word stone. This "stone" - the fact that the Father and Son are one is what caused many Jewish people to reject Jesus because He was claiming equality with God. In Romans 9:32-33 Paul quotes the prophecy in Isaiah 8:14 to explain why many Jews rejected Jesus as Messiah. Even today many stumble over this "stumbling stone." The wise man does not stumble upon this Rock, instead he builds his house on it.

Romans 9:32-33 "Why not? Because they pursued it not by faith but as if it were by works. They stumbled over the "stumbling stone." As it is written: See, I lay a stone in Zion that causes men to stumble, and a rock that makes them fall, and the one who trusts in him will never be put to shame."

Posted by A Messianic Moment at 6:22 PM